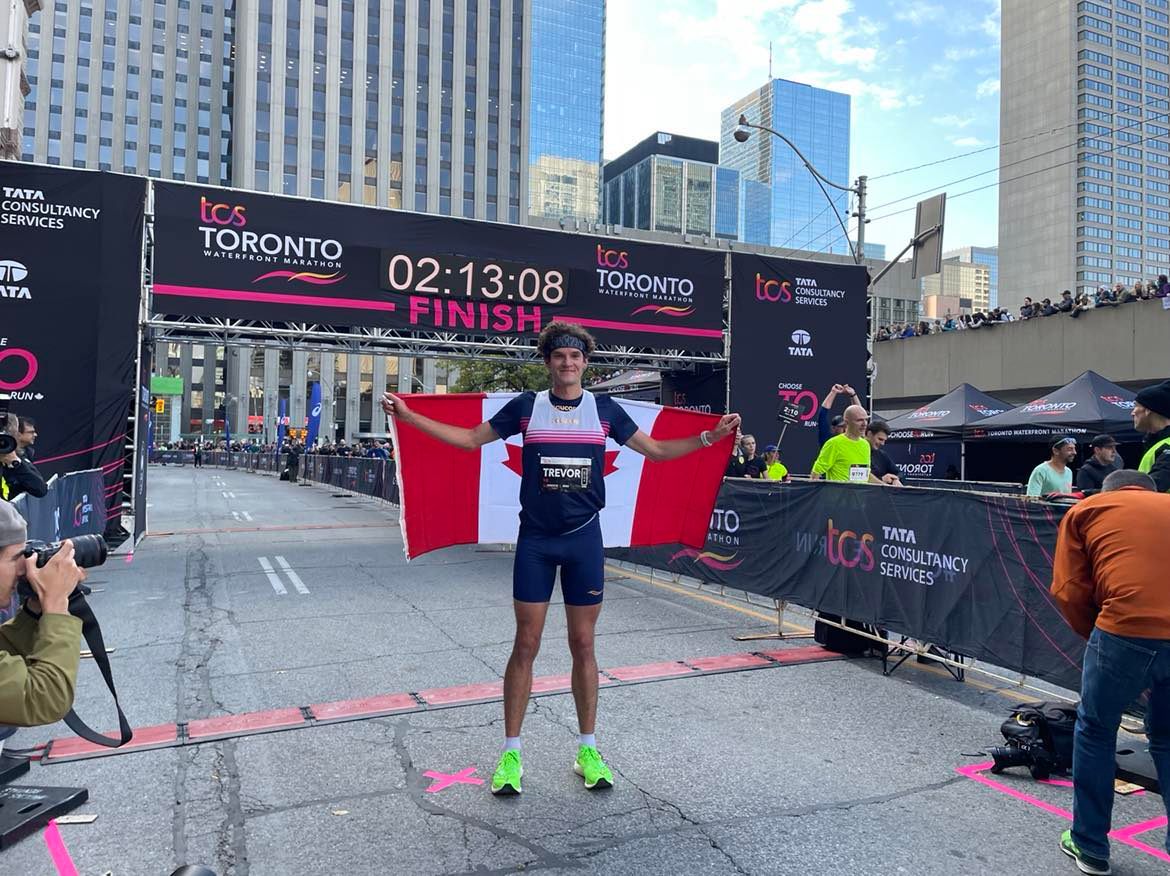 reigning champion Trevor Hofbauer came back from tense moments to win the Canadian Marathon Championship at the TCS Toronto Waterfront Marathon on Sunday, crossing the finish line in 2:11:00 and fifth overall. Hofbauer last raced here in 2019, when he won the championship and qualified for the Tokyo Olympics; it was his third Canadian title. And malindi elmore won the women’s title in 2:25:14 in her first marathon on Canadian soil, just off the podium in fourth place in the elite women’s race.

About 25 km after the start of the race, Rory Linkletter briefly fired forward, after Hofbauer developed a side stitch. “Mentally, I knew I had to take a step towards him,” Linkletter says. But Hofbauer came back to close the gap, then started to put distance between him and Linkletter. Linkletter eventually finished second in 2:13:32, bettering his time here from 2019 by three minutes. Lee Wesselius of River Glade, NB was the third Canadian in 2:16:51.

Hofbauer held up three fingers as he broke the tape in Nathan Phillips Square, signifying his third Canadian marathon title since 2017. “It was great to be back on the streets of Toronto,” says Hofbauer. “The support and energy from the crowd was incredible. It’s been a long and tough year, and being on the starting line here meant everything.

Elmore had little competition for the women’s title, defending champion Dayna Pidhoreski having dropped the pace after the 5 km mark. Some fans hoped Elmore could reclaim his Canadian record, broken on September 25 by Natasha Wodak at the Berlin Marathon, but it was not to be. Pidhoresky was the second Canadian, finishing in 2:30:58; Sasha Gollish finished third with a personal best of 2:31:40, after only a few weeks of marathon training.

“I’ve had this race on my calendar since 2012,” said Elmore. “I’m happy to finally be able to race here. Toronto hosted a fun race! »

The men’s elite race was won by Yihunilign Adane, 26, from Ethiopia in 2:07:18, after passing Felix Kandie of Kenya in the last seven kilometers of the race. Kiprono Kipkemoi of Kenya also passed Kandie, finishing second in 2:08:24; Kandie’s time for third place was 2:08:44. Adane has a PB of 2:05:53, from this year’s Barcelona Marathon, which he won in a course record.

The Waterfront Marathon course record of 2:05:00 set by Philemon Ronowho was supposed to race but had to retire last week, was in no real danger beyond the first minutes of the race.

The 2022 TCS Toronto Waterfront Marathon is back and all the action brought to you by Canadian running and Asics Canada. follow us on Twitter on Instagram for up-to-date exclusive news, live tweets and other content.

For more information on the 2022 TCS Toronto Waterfront Half Marathon and to see the full results, go here.