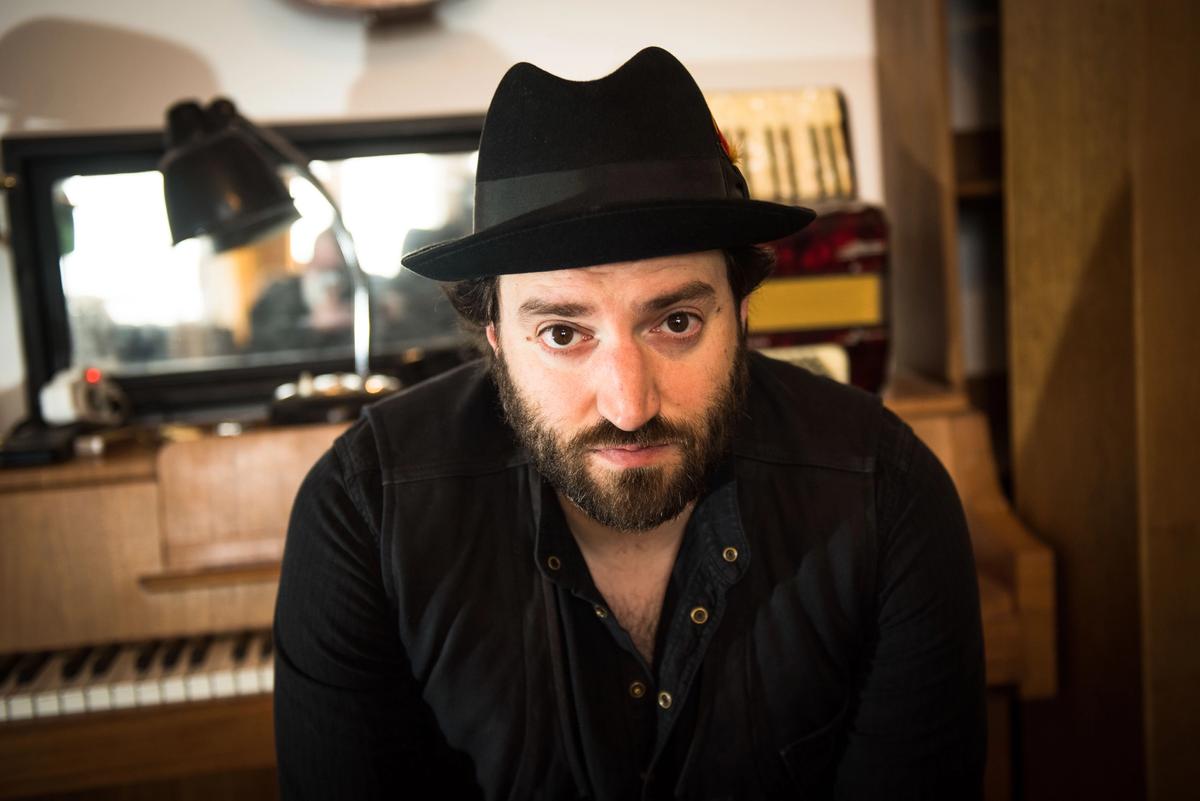 The first times I heard Daniel Kahn sing, I had the feeling that he belonged to another era. That sentiment had little to do with his Yiddish songs, or his Jewish work songs, or his accordion, or his lush diction and rhyme that I associated with romantic poets of the 19th century. It was something else, something about the quality of his voice: a slight growl, and a smirk that can weaken, flare up at any moment to invoke a lyrical and historical elsewhere. It was only when I listened to his last album, beggar word, that I understood where his music was taking me.

With the album, sung in Yiddish and English, on repeat, I realized that Kahn is a bard, in the old sense of the word. It’s a bard of the kind you might have found wandering the world a century or a millennium ago, or even further, until the earliest human attempts to capture their moment in history and pass it on. in poetic mythology.

The title of the album, beggar of words, comes from a haunting short poem by Aaron Zeitlin, originally published in Yiddish in 1947, which Kahn translated and set to music:

SIX LINES
I know, this world will never find me needed,
me, a lyrical beggar in this Jewish cemetery.
who needs a song—let alone in Yiddish?
the only beauty in this world is in despair and pain,
and piety is found only in what will not remain,
and the only rebellion is to submit.

The poem has gained momentum recently: the Yiddish Book Center hosted an event this year featuring numerous translations, including Kahn’s. Although brevity is the central feature of the poem – as the title itself emphasizes – it contains enough heartbreak to embrace a century of Jewish history. Who in the world would “find” the beggar in the poem “necessary”? On the contrary, it is rather the opposite – the beggar is generally considered a sore thumb, a parasite, who continues to take without giving back. This, of course, would be the view of a culture that measures a person’s value through their “necessity” or usefulness. Fortunately, other paradigms also exist, and the poem is a nostalgia for these other worlds.

As a child in Ukraine, I frequently encountered dozens of people asking for alms at the gate of the cemetery, perhaps because that is where the sense of humanity is reinforced by the closeness of one’s own mortality, with feelings of loss sharpening the need to do what is right. In this way, being a poet, especially a Yiddish poet, is not much different from being a “beggar”. Poetry is not “necessary” in any utilitarian sense, but our humanity depends on its existence. The fact that poets regularly broach the subject of mortality, and even tragedy, is perhaps not unrelated to why the discouraged come to the cemetery.

So what does it mean to be “a lyrical beggar” at the Jewish cemetery? The kind of cemeteries that Zeitlin talks about are long gone. There is no one to beg from except the dead. The gifts therefore also belong to the world of the dead: memories and visions, losses and language. If TS Eliot joked: “Immature poets imitate; mature poets steal,” Kahn’s vision of a poet-translator as a beggar of the dead offers a radical alternative. “It’s not as violent,” he told me in an interview, “not as subversive, maybe a little more honest, and maybe more ideal than other metaphors. At the end of the day, the thing given to you becomes yours. And what you do with it is nobody’s business.

My conversation with Kahn took place on Zoom. He appeared to be in a small room-workshop-museum in the port city of Hamburg, Germany, where he now lives with his partner, St. Petersburg-born dancer and translator Yeva Lapsker, and their son – on a boat . He is a rare artist who not only interprets his work, but also embodies it, and it was impossible to ignore the symbolism inherent in Kahn’s diasporic aesthetic. It was a Jewish artist’s vision of a life rocked by constant movement, a few steps from solid ground.

Kahn’s new album features Yiddish poems set to music, often with English verses alternating throughout the song. It also contains three songs that he translated in Yiddish from English – “I Shall Be Released” and “I Pity the Poor Immigrant” by Dylan, as well as “Hallelujah” by Cohen. This last title, released by the Cheeky in video form, went viral a few years ago, garnering over 2 million views. It is a virtuoso work, of course, with a translation rich in phrases that refer to both colloquial and spiritual Yiddish vocabulary, and therefore accessible to someone like me who does not speak Yiddish but knows the cultural references well enough. Jewish to contextualize their meaning. in the song.

Kahn’s translation was so masterful that the producers included subtitles, translating Kahn’s Yiddish into English. I asked him how he explained the explosive popularity of this work. How many people there speak Yiddish anyway? “First of all, I can’t account for it because I suck at accounting,” he joked. “And anyway, how many people talk Leonard Cohen? Very little. A lot of people love this song and have no idea what it’s about. Clearly, Kahn is not just talking about Leonard Cohen, but is also in Cohen’s bardic lineage, as a singer with poetic sensibility and a prophetic stance. The video, released days after Leonard Cohen’s death, served as a de facto tribute and passing of the torch.

Kahn does all the vocals and plays all the instruments on the album – piano, guitar, accordion and harmonica. But its recognition section is longer than an orchestral roll call. At the end of the liner notes, he writes: “A hartsikn excellent [hearty thanks] to the khaverim [friends] who touched on these verses and versions”, and includes a large group of Yiddish musicians and poets, scholars and artists. For a solo album, that’s a long list. “It makes no sense corn a solo album,” Kahn explained, “because it’s not like it’s mine. That’s also why it’s called beggar word: There’s not a word in there that I haven’t somehow taken from someone else, somehow. The art of translating is as much an act of listening, reading, receiving, analyzing and understanding, as it is an act of production or creation.

The Yiddish revival, now spanning a few decades, is an attempt to engage with Yiddish literature, Eastern European Jewish history, and secular and religious culture. Its exponential growth is the result of the warm, supportive and collaborative spaces that have made albums like beggar word possible. Kahn, who first became aware of the Yiddish revival in his early twenties after visiting the Klez Kanada festival, recalled: “From the start, I was excited by this scene because it was a stage… an incredibly fertile environment where people collaborated across generations, across political lines, religiosity, national origins. It was a community and a conversation that I found fascinating… My involvement in Yiddish song begins and ends by taking part in this conversation. In these circles, Yiddish is not the object of half-baked sentimentalism, but a generative field of discourse, study and transformation, or, as Kahn put it, “It was the thing that was simultaneously learned and created.”

Like other ambitious projects from the Yiddish revival milieu, her album is also a research project and a masterclass. Like an actual encounter with a bard, it’s a personal and global history lesson, and an attempt to right a historic wrong: “I didn’t grow up on that stuff,” Kahn told me. “I haven’t been told about Itsik Manger, the radical Yiddish artists, those visionaries. It wasn’t part of my Jewish upbringing or my secular upbringing, it wasn’t part of my world. And part of that was that they were all hiding behind the wall of not understanding Yiddish, but I don’t think that’s a very good excuse because there were all kinds of other poets that I knew in all kinds languages ​​I didn’t speak. It was part of this willful neglect, part of a willful insult to this culture and these people, and it was the Jewish culture that was passed on to me in my youth.

Kahn grew up in a lower-middle-class suburb of Detroit and attended Sunday school at the local Reform temple. Like many others, he now wonders what happened to Yiddish culture, which, after being nearly destroyed in the Holocaust, continued to be erased by the dominant Jewish establishment. I don’t know if every revivalist has a manifesto on the tip of their tongue, but this revivalist bard certainly did. When I pressed Kahn to articulate what appealed to him about Yiddish itself, he unceremoniously exploded with the following spontaneous poem-manifesto (also pictured below):

“Any theory aside, identity politics aside, history aside, cultural background aside, Yiddish is a fucking sexy language. It is a beautiful language. This is delicious. It sounds good. It’s flexible. It is a contortionist language. The musicality is integrated. It is so deeply familiar and idiomatic; you get lost. You can never fully understand him unless you belong to one of the many worlds he grew up in. There are the the. There is content. The content fascinates me, and the context is what we have to create on our own, because it’s not a language that has a holistic natural context… Every time we have a gig that has that content, we create an island temporary context for this. We have to do it ourselves.

beggar word certainly qualifies as an “island of context,” but it doesn’t just depend on sexiness and beauty. This album, like many of Kahn’s other works, demands rigor and commitment from its audience. To listen beggar word is something of a project: I spent the first few hours following the liner notes, trying to trace the lyrics and link them to the translations, hoping to get a sense of how the music reacts to the meaning of the words. I spent a lot of time googling the names of contemporary Yiddish poets and new Yiddish masters, as well as lyrics to songs by Bob Dylan and Leonard Cohen. It was an immersive learning experience.

Of course, that doesn’t mean one who can’t sing along to the album or listen to it while driving. But you might sing yourself as you take an unexpected turn, and then you might find yourself on a boat, sailing through history.