Xavier Garcia Jr. in his studio. Photograph by Wyatt Kostygan.

Today, finely crafted tables and built-ins are the cornerstones from Xavier Garcia’s Sarasota-based design and woodworking business. “Building something that didn’t exist before and having it solve some problem is very satisfying,” says Garcia. It was a concept that Garcia first experienced while working on a bachelor’s degree in design architecture from the University of Florida in 2003. After graduating, Garcia returned to Sarasota in 2004. He worked for his father’s architectural and design-build contracting business, Las Casitas Design. and Marazul Building Company. Then the 2008 recession hit and the work dried up, Garcia says, leading him to switch to handyman-type jobs and finish carpentry. Eventually, Garcia found his niche as a freelance carpenter and founded Ninzan Studio in 2008. The company now serves Sarasota and Manatee counties, including areas such as Lakewood Ranch and the barrier islands. “I really enjoy the practical aspects of carpentry, which allows me to use most of my architectural training in the field,” says Garcia.

For a good decade, Ninzan Studio has provided customers with finish carpentry, cabinetry installation, exterior carpentry (such as gazebos and wooden decking), window and door installation and cabinet work. custom wood. In 2018, Garcia expanded, earning his state-certified general contractor license and founding sister company, Ninzan Build, LLC. “With this addition, we continued to do carpentry work in the field, but we could now undertake larger work, which required permits and additional trades such as plumbing, electrical, mechanics, etc. .,” says Garcia. 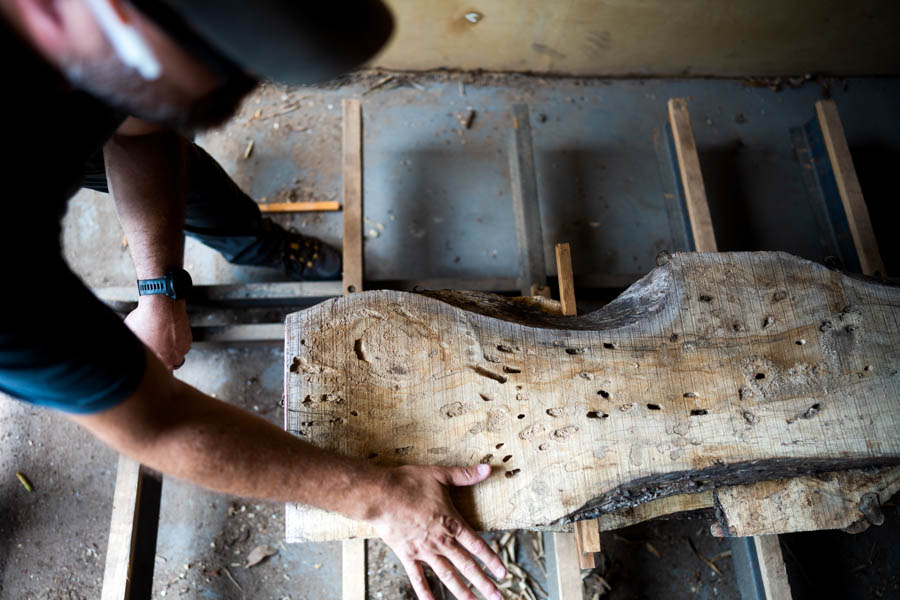 As of 2020, Garcia took over the Wood Street Studio location at 1490 20th St. in Sarasota following the retirement of former studio owner Dale Rieke. There, Garcia and his team of five craftsmen now create custom wood furniture, custom cabinetry, and architectural millwork (and they bring in several trusted contractors for larger projects). “We focus on shop-built joinery and installing that work in conjunction with general contractor work through Ninzan Build,” says Garcia. “Ninzan Studio also offers design and shop drawing services so clients can see their projects on paper before any work is done.” These projects are diverse and complex. One notable undertaking was the 2016 guest suite renovation on Siesta Key. Ninzan handled the interior construction of a guest bedroom above the garage, interior framing and joinery, as well as the fabrication and installation of a set of barn doors in cypress trees and floating cypress shelves. “This project was fun. The pointed cypress material was provided by the owner (their family has a large amount stored on their family ranch in Wauchula, Florida),” says Garcia. “We didn’t draw anything for this project, but instead created mockups and sample boards to speed up the design process. The owner had a good idea of ​​what he wanted and we helped him get there . For this house, Ninzan also embarked on a cabinetmaking and terrace project. Garcia and his team designed a reclaimed barn beam fireplace mantel, a solid cypress prayer bench, an interlocking PVC roof deck, and cypress walls and cabinetry in the kitchen and laundry room.

Garcia is also immensely proud of the work his team did on “The Beneva House.” Ninzan tackled the exterior and interior trim, as well as the finish punching. The team worked closely with builders at Bay Point Construction to install the entry door system, interior doors, door hardware, baseboards, custom fireplace wall and mantel, exterior beams, columns, ceilings and cladding. . Ninzan also built the children’s bedroom built-ins to match Taylor James’ distinct wardrobes. “The Beneva House project was primarily joinery, including interior wood ceilings and box beams, as well as exterior trim elements such as column wraps, box beams and facings,” says Garcia. . A number of other Ninzan team art projects have included a custom dining table and bench, crafted from locally harvested rosewood slabs with an ash base finished in a black stain (all three slabs were ground in sequence from the same tree); a quarter-sawn and quarter-sawn ash dining table with a natural finish and white stain; and a complete renovation of a 1970s ranch along the Manatee River. “I guess most of what I learned in architecture school was: given a set of parameters, solving a problem in a creative and meaningful way,” says Garcia. “Often the process is as important as the end result.”

2022-08-17
Previous Post: What is Process Mining and how can it help governments?
Next Post: Bass Player magazine shut down as brand moves fully online