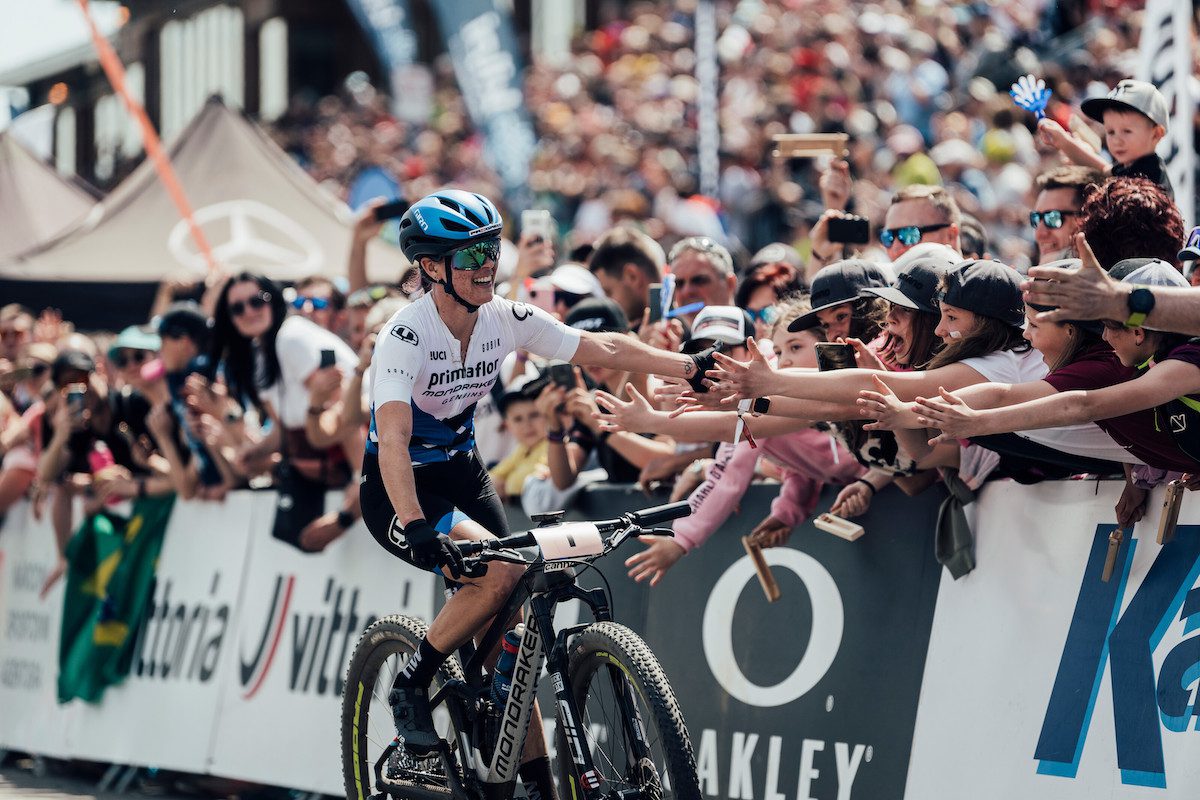 McConnell is an authority on the Women’s World Cup series

Rebecca McConnell’s fantastic start to the 2022 season continues to build momentum. The Australian dominated the women’s cross-country race at Nové Město on Sunday, riding alone from the opening lap to claim a third victory in as many races.

“My goals have been well and truly achieved for the year,” beamed the Aussie after the finish, adding “I’m just living the dream.”

Sandra Walter led the Canadians in the Czech Republic, finishing in the top 30.

Jackson shines from the start

Right off the bat, Canadian National Champion Jenn Jackson (Canyon MTB) jumps on fast wheels from her start from the second row, sitting behind leading Jenny Rissveds (Team 31) and Alessandra Keller (Thomus Maxon). Jackson fights along the fencing, but finds space and stays at the end of the run.

It’s Rebecca McConnell (Mondraker Primaflor), however, who leads the first single track in the starting loop. The World Cup leader is already opening a gap with the Rissveds and Specialized duo of Sina Frei and Haley Batten.

McConnell leads the starting loop and into the first good lap with a two-second advantage over Rissveds. This pair is already 12 seconds ahead of Batten, Jolanda Neff (Trek Factory Racing), Frei and Loana Lecomte (Canyon Cllctv). Jackson is 20th, part of a large third chasing group.

Rissveds briefly joins McConnell on this first lap but the Australian takes off on a climb and, with a gap, absolutely flies over the rocky descents of Nove Mesto. The World Cup leader clearly has no intention of expecting company in the Czech.

Rissveds and Lecomte in pursuit

Rissveds, for his part, seems to be pacing more cautiously. She is soon joined by the dominant rider of 2021, Loana Lecomte. Keller pursues closely, but fails to catch the wheels in front of her.

After two laps, McConnell already had a dangerous 21-second advantage over the chasing duo. The gaps widen quickly in the field, even with the fast and dry conditions of Nove Mesto.

There is confusion in the chasing group behind as World Short Track Champion Sina Frei crosses the wheels while searching for a bottle in the pit area and falls hard. The Specialized rider quickly gets back on her bike and joins the chase behind Evie Richards (Trek Factory Racing) and Pauline Ferrand-Prevot (BMC)

McConnell in a race of his own

Going into the second half of the seven-lap race, McConnell maintains a 20-second gap over Lecomte and Rissveds. Keller continues to swing right behind this duo but loses ground due to a rear puncture. Neff, the reigning Olympic champion, returns to the lead in fourth position.

The Lecomte-Rissveds duo sometimes reduced the gap to just 14 seconds, but McConnell attacked the descents and kept the gap constant at 20 seconds each lap.

In the penultimate lap, this gap remains unchanged. But Lecomte opens an advantage for Rissveds behind her. Behind, the race exploded. Neff is fourth on the course, but 1h30 behind. Caroline Bohé (Ghost Factory) separates from the chasing group to catch up and overtake Neff. Keller is still fighting for her position, 12 seconds off sixth place.

Coming out of the last lap, it’s all about McConnell. Lecomte’s efforts only serve to maintain the gap at 17 seconds. Rissveds is still 30 seconds behind the Frenchwoman. Neff uses his top-down prowess to gain the advantage over Bohé. The Under-23 rider still has the momentum, however, and comes back ahead of Neff on the climb. Moana Mitterwallner (Cannondale) is also putting the pressure on the Olympic champion as the fight for the bottom positions intensifies.

McConnell enters the stand already beaming, smiling and waving to the Czech crowd. The Australian, who only won her first World Cup a month ago, now joins an elite group of four riders to make a perfect start to the season and win the first three World Cups in the year. Canadian Alison Sydor, American icon Julie Furtado and Norwegian Gunn-Rita Dahle Flesjå are the only other runners to win the first three heats.

“I knew going into this race that I was in the best shape of my life. I didn’t really know how to attack this race, and we decided that aiming for a podium was the best way to approach this race instead of the pressure to go for the win. So I’m speechless again,” McConnell said after the race. As she rode solo, the Aussie kept a close eye on the pursuers. “I always feel like I have a good run in Nove Mesto, and the start loop really broke everything this year. I was riding alone in the wind and looking back, and Lecomte was always in the wind too , Jenny never seemed to be up front.

With three XCO wins and an XCC World Cup to boot, McConnell now leads both series. When asked if she’s started thinking about overall titles, the Aussie is cautious.

“Last year we had six World Cups, and it would be a very good advantage if there were six this year. But with nine World Cups, it’s still early days. My goals have been well and truly well done for the year, I’m just living the dream”

Lecomte is second, a tired Rissveds finishes third. Bohé is ahead of Neff, who sprints ahead of the young Danish rider to take fourth place at the line. It’s the Swiss star’s 50th start in the World Cup and it’s completely normal for her to be on the podium.

Sandra Walter (Liv) leads the Canadians in 28th. This is another solid finish from the perpetually fast runner from Coquitlam, BC.

Jenn Jackson started on the second row and rode in that position for the first lap. An early mechanic sent the national champion back through the field, down to 60th on the course, before chasing him for the rest of the race. Jackson set the 20 best lap times for the last four of seven laps to move back to 34th on the course.