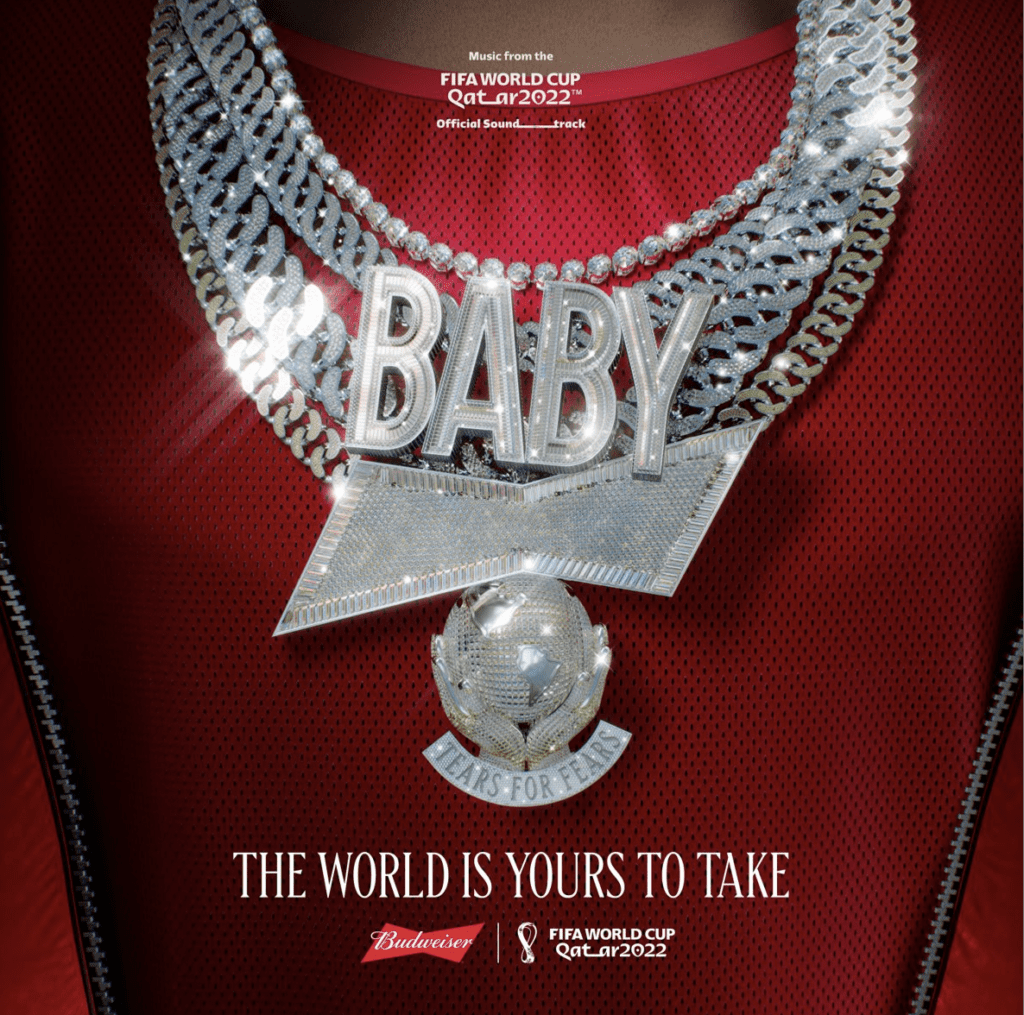 Today, Grammy-nominated rapper, mogul, and philanthropist Lil Baby teams up with Budweiser to release “The World Is Yours To Take,” a new single to be featured at the first-ever official FIFA World Cup. , Qatar 2022. campaign content from Budweiser, the official beer of the FIFA World Cup. The high-energy anthem samples the iconic refrain from Tears For Fears’ hit song “Everybody Wants to Rule the World,” inspiring fans to begin their journey to greatness. The pop song transcends generations and geography, punctuating the go-getter energy that Budweiser and Lil Baby were looking for for the collaborative track.

Listen to “The World Is Yours To Take” HERE and watch the lyric music video HERE.

Four years ago, sports fans around the world gathered for the 2018 FIFA World Cup just as Lil Baby began his path to stardom with the release of his debut album. Today, the Atlanta native and globally acclaimed rap phenom uses the global FIFA World Cup stage and his partnership with Budweiser to reflect on his journey and inspire fans to get going.

“My new track with Budweiser for the FIFA World Cup Qatar 2022 soundtrack is special to me. It’s about the journey we’ve all been on over the past few years and the celebration of what’s to come. When I started in music in 2017, I embarked on a dream that brought me to where I am now, and that’s how I want fans to feel when they hear the song. hope this makes you feel like you’re stepping onto the World Cup pitch taking steps towards your own dreams, whatever that means to you,” Lil Baby said.

One of eight singles featured on the official FIFA World Cup Qatar 2022 soundtrack, “The World Is Yours To Take” will be celebrating Lil Baby’s 28th birthday with a live performance at the Budweiser Hotel during the tournament. Budweiser and Lil Baby don’t stop at a worldwide hit single; the duo will team up with amazing artists around the world to release new versions of the song and shoot the music video for the FIFA World Cup in Qatar which will take place from November 20 to December 18, 2022.

Some artists define a genre, but Lil Baby defines a generation. The GRAMMY Award-winning rapper has broken records, made history, and shaped the course of modern hip-hop with his instantly identifiable and inimitable style. He earned dozens of multi-platinum certifications and tens of billions of streams as arguably the biggest new rapper to emerge this decade. Following the success of his platinum debut feature Harder Than Ever in 2018, he captured the top spot on the Billboard Top 200 with My Turn in 2020, becoming “the best-selling and most-streamed album of the year in the United States. At first, this cemented him as “the first and only artist of 2020 to go double platinum,” but he has since gone quadruple platinum and logged 85 weeks in the top 10 of the Top R&B/Hip-Hop Albums chart. , marking the longest high-level run in chart history.

He notably tied Prince and Paul McCartney for Billboard Hot 100 hits and Taylor Swift for “most weeks atop the Billboard Top 200 in 2020” with a total of 6. Out of eight nominations, he won his first GRAMMY Award in 2022. He’s appeared on the covers of Rolling Stone and the Billboard R&B/Hip-Hop Power Players Issue in addition to receiving honors from VEVO, Rap Caviar, the Apple Music Awards, and more. He teamed up with Lil Durk for The Voice of the Heroes, marking his second No. 1 debut on the Billboard Top 200. That’s just the start though. He’s set to revolutionize the culture again with his third album in 2022. Most recently, he released “Right On” and “In A Minute,” both songs of which debuted on Billboard’s Hot 100 chart. This feat puts Lil Baby in rare territory, making him the youngest of 12 artists to ever land 100 or more songs on the Hot 100. This generation belongs to Lil Baby.