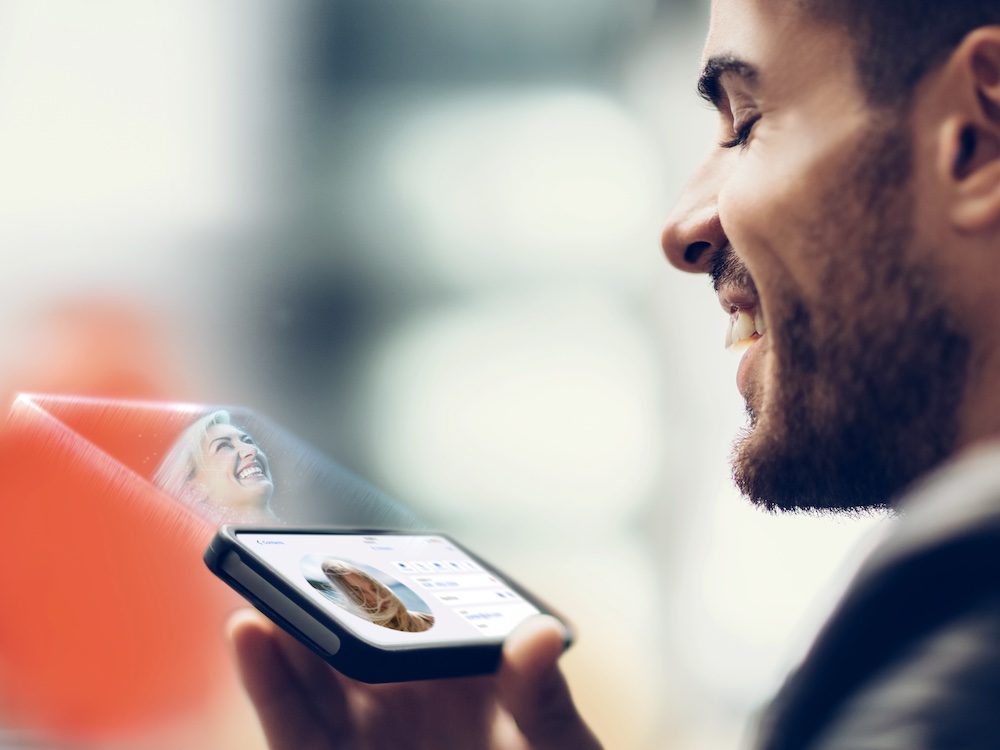 “Help me Obi-Wan Kenobi. You are my only hope,” pleads a pale, shimmering image of Princess Leia, projected by the trusty droid R2-D2. In an emblematic scene from the first star wars film (1977), heroes Kenobi and Luke Skywalker are transfixed by the three-dimensional display, which materializes in front of them as if a miniature Leia were present in the room.

For science fiction fans, the term hologram often conjures up images of floating projections that present characters with interactive information to help them navigate a futuristic world. Different iterations of the concept have appeared on screen in recent years, seen in everything from superhero movies like Iron Man to the Netflix series black mirror. In literature, they appeared as early as Isaac Asimov’s 1942 story “Foundation”, in which a character’s pre-recorded video messages are played as 3D projections.

Although existing technologies for projecting artificial images into real-life environments – from head-mounted devices to stage projector systems – can create compelling 3D experiences, they generally fall short of the interactive, floating images envisioned by filmmakers. and the futurists. Nevertheless, researchers and tech companies are now developing display systems that they hope will one day fulfill the promises of science fiction.

Originating as red- or green-tinted ghostly images of inanimate objects, holograms are often used today as security features – think shiny labels on credit cards or iridescent watermarks on various IDs, for example. example. In its early years, holography was typically done by splitting a laser beam in two, then shining one beam at an object before recombining the beams, creating an interference pattern that was printed on light-sensitive film. . Hungarian physicist Dennis Gabor developed the technique in the 1940s using an electron beam, more than a decade before the advent of the laser.

But, since traditional holograms must be viewed via flat surfaces like credit cards or photographic plates, creating a Leia-like image in the open would be impossible using conventional holography, says Daniel Smalley, associate professor of electrical and computer engineering at Brigham Young. University (BYU). Instead, devices that produce aerial 3D graphics, in which light-scattering image points are distributed in space, are generally categorized as volumetric displays. “Instead of looking at them like a TV, you can look at them like a water fountain, where you can walk around and you don’t have to look up at the screen to see that imagery,” says Smalley.

Although these aerial imaging systems are still in the early stages of development, Smalley and other technologists envision a not-so-distant future in which floating 3D projections are widely used for video chats, medical imaging, and screens. emergency.

Aiming to replicate a Leia-like image in the real world, Smalley’s team at BYU developed a technique that combines a laser with a dust-sized cellulose particle to produce images that appear to float.

A laser beam containing low-energy pockets, or “holes,” can be used to trap the particle and drag it through the air, Smalley says. By illuminating the particle with red, green and blue beams as it follows a predetermined trajectory, the system renders colorful graphics in the air. The image is redrawn at least 10 times per second, creating the illusion of a coherent image. In other words, “we move the sparkler fast enough that it looks like one continuous line,” says Smalley.

The team produced miniature images of a butterfly, a spaceship and even a Princess Leia lookalike. Smalley says the system could be extended by trapping and scanning many particles at once. Additionally, the images themselves could be made more robust by controlling how the particles reflect light in certain directions. By governing how light is scattered at each point in the image, the technology could also present multiple viewers with different experiences depending on their vantage point, he says. “Each person in the room looking at the same space might see something totally different,” says Smalley. He adds that a sufficiently advanced device could one day allow, for example, a child to view their homework as a projection – while one parent makes a video call and the other plays a game in the same space. .

And while other techniques using lasers – as well as some that use sound waves – offer intriguing possibilities, producing an image requires a physical piece of matter to be illuminated. A team of researchers across the Pacific took the sci-fi concept one step further, creating aerial images using only light.

Imagine this: you are sleeping on a Saturday morning when the sound of an alarm clock rings on your device. You turn around groggy to see the word SNOOZE projected into the air above your device. You reach out and touch the virtual button with your finger – a slight tickling sensation on your fingertip – before falling back to sleep.

Researchers at the University of Tsukuba in Japan are working on technology that could make this scenario possible. Led by Associate Professor Yoichi Ochiai, the team creates graphics in the air using a laser that emits ultra-short pulses of light. The high-intensity beam can break down air molecules by ionization, producing short-lived grains of light, or plasma. The system renders images by rapidly adjusting the focal point of the laser in three dimensions, generating thousands of emission points, or voxels, per second.

An earlier version of the technology used nanosecond laser pulses, which have the unfortunate side effect of burning human skin. Ochiai’s setup, dubbed Fairy Lights, uses much shorter femtosecond laser pulses that are far less dangerous despite high peak intensity, Ochiai says. The little hearts, stars, and fairies the system projects are not only safe to touch, they react to contact. In one demonstration, the table system projects a checkbox that can be filled in with your finger. “It feels a bit like sandpaper or electrostatic shock,” says Ochiai.

Along with augmented reality applications, such as a floating keyboard, the system’s haptic properties could be used to create a kind of aerial braille, Ochiai says. He also envisions large-scale emergency screens that could be projected over a city to warn residents of a natural disaster or direct them to an escape route. While the initial images were no larger than one cubic centimeter, Ochiai explains that the scalability of the system depends on the size and power of the optical equipment. Large systems are currently prohibitively expensive, he says, adding that technologies that draw images using plasma will likely become more feasible over the next 10 to 20 years as the multi-million dollar price tag declines. .

While laser-based approaches are in their infancy, research groups and private companies have developed various screen displays to generate 3D images. Many of these have been marketed as holograms, although they typically rely on other technologies, such as polarized glasses, near-eye displays, or stacked LCD displays.

IKIN, a San Diego-based startup, is working to create three-dimensional displays through a new device that attaches to smartphones. Known as the RYZ (pronounced “rise”), the accessory features a patented lens, says founder and chief technology officer Taylor Scott. For a viewer looking through the portal, colored objects appear against the real-world background.

Leveraging advanced artificial intelligence algorithms, the device captures the user’s eyes and other signals to not only simulate stereoscopic depth, but also to merge photons from the background environment with the light projected onto the retinas of the user. This “additive processing” allows the system to continuously adjust an image in real time to compensate for the brightness and color of objects behind the image, Scott explains.

“We’re tracking the environment around you and already using the light that’s coming into your eyes and adding to that to create the image we want,” says Scott, adding that the device can be used in daylight, unlike most goggle-based systems. and stage productions. Users can manipulate high-resolution depth fields by touching the glass window, and multiple users can view different perspectives of images depending on their position relative to the device.

Scott foresees a litany of applications for the technology, ranging from immersive video communications to advanced medical imaging techniques, such as brain scans and echocardiograms. Software developers will be able to create content for the device, while the RYZ app will allow users to play games and convert their existing digital images and videos into depth fields. “We’re giving consumers the ability to take all of their memories and relive them in a hologram,” says Scott.

While the laws of physics will likely prevent technologists from generating Leia-like projections anytime soon, advances in volumetric display technologies are sure to bring increasingly compelling approaches to the mainstream.

For example, you might see this technology used in video games. And while IKIN has made a concerted effort not to be pigeonholed into the gaming space, video games are in the startup’s DNA. Scott is an avid gamer; in fact, the impetus for the display device was a desire to delve into the world of one of his favorite console games. “The reason I came up with this system was because I wanted to play Legend of Zelda in a hologram,” Scott explains. “I love Zelda.”