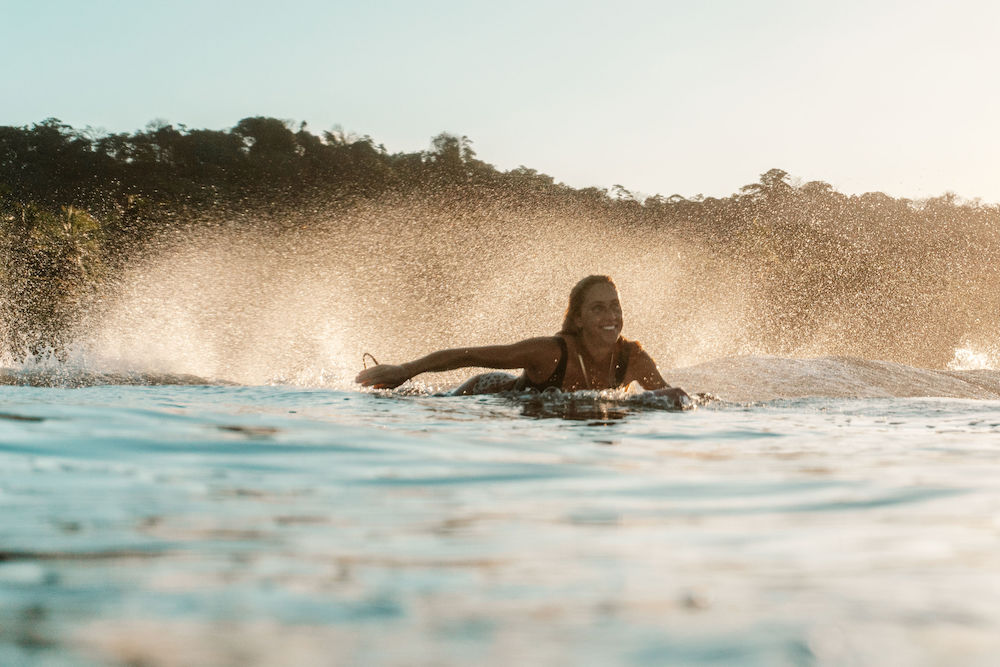 Reef’s first British Ambassador has carved out a unique career as a surfer, photographer, stylist and lover of life. Back from a trip to Costa Rica, WL spoke to him before his appearance at the Spring Classic Surf Invitational.

Evie Johnstone should be jet lagged, even though she’s determined to ignore it. That morning, she had returned from a trip to Costa Rica at her home in Newquay, and unpacking is not easy for the surfer, the photographer and the stylist.

“My mum picked up my camera bag this morning and almost broke her back. It weighs 55 kilograms, which I carry as hand luggage,” says Johnstone. “I also usually travel with three surfboards, plus my luggage. And, there are all the products that I take from my clients for the shoots. I walk through the airport with almost 100 kilos!

Johnstone isn’t complaining though. Her endless positivity is just one of the traits that have helped her carve out a unique career in the space where surfing, photography, brand campaigns and content intersect. This made her both a creative force and a pair of sure hands. It also led to Reef signing her as the first British Ambassador.

“I’ve always tried to be true to who I am,” she says. “I don’t see myself or want to be seen as an influencer. I do not make paid posts for example. I just work with brands that I love and that resonate with me and reflect my love of surfing and travel. That’s why the Reef Ambassador role is such a great fit.

Not surprisingly, Johnstone’s last trip was to Costa Rica. After finishing school at the age of 17, she bought a one-way ticket to the Central American country and stayed there for the next seven years. While her father had taught her to surf on the south coast of the UK near her home in Chichester, it was in the Costa Rican surf town of Santa Teresa that her passion ignited.

“When I left the UK I really wasn’t very good at surfing, well, I still am,” she laughs. “But there at the start, I was really in the deep end. However, I dedicated myself, day by day. I worked with a trainer and started competing and really got into the 100 million mph sport.

The results were immediate and impressive. She landed multiple podiums on the Costa Rican Pro Tour and soon had enough sponsors to fund her surfing trips along the Central American coast. With some success and plenty of ambition, she returned to the UK and joined the UK circuit. In 2012 she won the UK Pro Surf Tour to become the British Champion. Her goal of getting the big sponsor sticker on the nose of the board and being a pro surfer seemed within reach – until it was no longer.

“The competitive side of surfing made me happy because it appealed to my competitive nature, but later it got stressful over time,” she said. “I realized that I wasn’t really doing it for the pure love of surfing, which was most important to me. At around 25, I was done with that side of surfing.

Johnstone has always been an avid photographer and she increasingly turned to documenting her surfing trips and her itinerant lifestyle. Working with Surf Girl has opened up opportunities with various brands, and over the past five years she’s added style and content curation to her creative quiver. Working as a one-woman tour de force, she travels the world, selecting models, styling shoots and doing all the photography herself. Well, in between surfing his brains.

When she got back to the UK she also had another box to unbox – a new set of Reef stickers. “It was the dream since I was 17 and I’m 33 now, so putting these newcomers on my board is so exciting. I had parked it for a long time, but here we are. An exciting new chapter begin.

Evie’s next trips will be a little less exotic, but no less fun. She is heading to Woolacombe as a guest of the Spring Classic Surf Invitational, which will be held on Saturday May 27. As a self-proclaimed ‘lockdown longboarder’, she can’t wait to ride the range of retro craft and enjoy an encounter with Britain’s surfing tribes.

“I can’t imagine the competition juices will come into play, because it’s just good old fashioned kneeling, isn’t it?” Evie laughs. “I’ll bring my van, have a few bevvies and listen to some good music. We all know that nobody does festivals better than the UK. Bring it I tell you!

Grab your tickets now to watch Evie paddle alongside some of the UK’s best surfing talent at the Spring Classic Surf Invitational.