50. Double Homicide Highlighted in People Magazine: Who Killed a Sanford Woman and Her Boyfriend?

Count ’em: For better or worse, here’s Headline Surfer’s countdown of 2021’s 100 Biggest News on Central Florida along the tourist stretch of Interstate 4 (Orlando Attractions and east to to I-95 and Daytona’s most famous beach). Each recap segment is released with its own title, culminating with the unveiling of #1 in the first two weeks of January, if not sooner, before moving on to the Top 5 storylines – the good, the bad and the ugly at the moment. horizon in “2022: the year ahead”.

Photos for Headline Surfer / Screenshot of People magazine’s cover of the double homicide. Below: A suspect, Edgar Levern Lemon Jr. is arrested in April for felony accessory to homicide after the fact and destruction of evidence 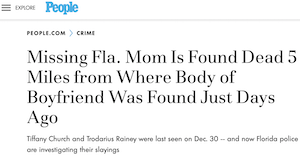 SANFORD, Fla. — It was the Sanford double murder mystery that was brought to light in People magazine in early 2021.

The body of the woman discovered is that of the local mother of two, Tiffany Church. It is now a double homicide investigation into the shooting deaths of Church and her boyfriend, Trodarius Rainey.

Seminole County Sheriff Dennis Lemma told People that his deputies were working all leads and “focusing on people of interest,” adding, “We believe the victims knew the killer(s).”

The body of a Florida mother-of-two has been found a few miles from where her boyfriend’s remains were discovered as authorities say they are ‘looking into ‘persons of interest’ , as told by People following a Lemma press conference on January 6, 2021.

Tiffany Church, 35, and her boyfriend, Trodarius Rainey, 26, were last seen at a gas station in Sanford on December 30, Lemma said at the press conference, adding the next day that their rental vehicle, a 2021 Toyota Camry was found in Sanford with a bullet hole and “both occupants missing”.

“Obviously that arouses suspicion,” he said at the time.

After speaking to the couple’s family members, the couple were declared missing and in danger, the lawyer said.

Then, on Jan. 2, a man walking his dog in a local park discovered Rainey’s body, which authorities say was brought there, Lemma added.

The discovery of Rainey’s body launched a “general search” for Tiffany, Lemma said.

A dive team using sonar searched the local waterways while aviation and canine units and a volunteer search and rescue team searched for the missing mother, he said.

“It doesn’t appear to be the crime scene of the murder,” Lemma explained, adding:

“Travis was shot several times and Tiffany (appears to have been) shot once,” he said.

The SCSO did not know whether they were shot together at the same time or separately at different locations.

Investigators are “confident that the perpetrator or perpetrators involved in this case were known to the victims,” ​​he said.

Based on the investigation so far, authorities are “focusing on interested individuals,” Lemma continued. “We know who we believe may be involved.”

But then the trail went cold – that is, until April – when a man was arrested investigators were able to connect to the case. 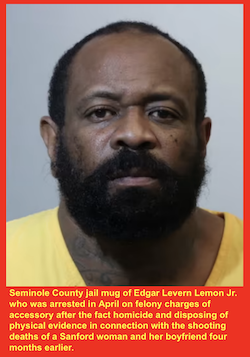 But then the trail went cold – that is, until April – when a man was arrested investigators were able to connect to the case. SCSO deputies arrested Edgar Levern Lemon Jr. for felony incidental homicide after the fact and destruction of evidence.

Never one to give up, Lemma said her investigators are still looking for a motive and “continue to work to assess physical evidence from the scene.”

Lemon Jr.’s phone was in the Jesup Lake Park area, the location where Rainey’s body was found.

The search for Rainey and Church began after the black Toyota Camry they were last seen in was found in the area of ​​the 1900 block of Cameron Avenue in Sanford.

Cell records show Lemon Jr.’s phone was in that area as well.

His fingerprints were also left in the car, according to court records.

Calling their killings “heinous”, Lemma said the SCSO remained committed to ensuring that “we will work to ensure that the families of these victims find an end and that the person or persons responsible are held accountable to the fullest extent possible. law.”

Calling their killings “heinous”, Lemma said the SCSO remained committed to ensuring that “we will work to ensure that the families of these victims find an end and that the person or persons responsible are held accountable to the fullest extent possible. law.”

The couple’s death was a tragedy, he said, pointing out that “Tiffany Church was a mother of two children” and that Rainey was a 26-year-old man.

“No one deserves to die and be found by the side of the road,” Lemma reiterated.

About the author of the signature: Henry Frederick is a working press member and publisher of Headline Surfer, the award-winning 24/7 Internet media outlet launched in 2008, serving the greater Daytona Beach, Sanford and Orlando area from Lake Mary, Florida via HeadlineSurfer.com. Frederick has amassed nearly 150 award-winning signatures in print and online. He earned his Master of Arts in New Media Journalism from Full Sail University in 2019. He was a breaking news reporter (subway cops and courts) for the Daytona Beach News-Journal for nearly a decade. And before that, the same beat worked for The Journal-News/Gannett Suburban Newspapers in Rockland/Westchester Counties, NY, dating back to 1989. Having witnessed the execution of serial killer Aileen Wuornos in the bedroom of the death from Florida and covering other high-profile cases, Frederick appeared on national crime documentary shows on Discovery ID, Reelz and the Oxygen Network series “Snapped” for his analysis. • Award-Winning Journalism: The Florida Press Club recognizes Headline Surfer for nine articles in the 2020 statewide contest. • Award-winning journalism by Henry Frederick.

50. Double Homicide Highlighted in People Magazine: Who Killed a Sanford Woman and Her Boyfriend?